My REMIX of DEATH ON WHEELS by Toronto’s A PRIMITIVE EVOLUTION is about to be released accompanying a new music video for the original jam. 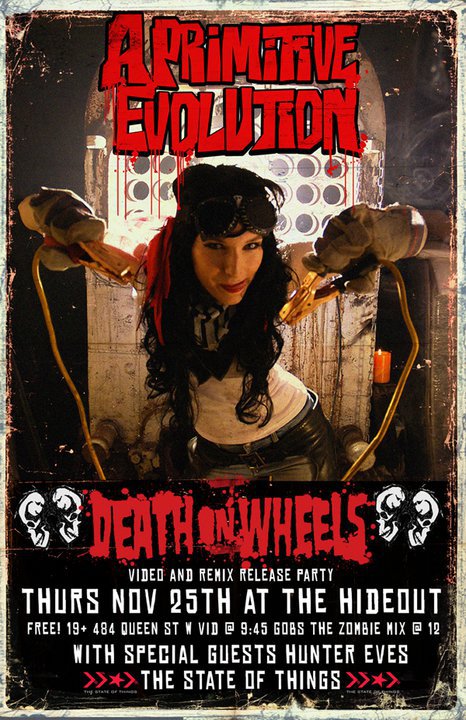 APE always do things BIG, so they’re having a killer release party on NOVEMBER 25th at THE HIDEOUT in TORONTO (484 Queen Street W). The band will be performing accompanied by HUNTER EVES and THE STATE OF THINGS. And this bitch is FREE!

I did the remix because I think this band kicks ass and they put on a stellar live show. It will be released shortly after the party. For now, you can preview it on my SOUNDCLOUD!

I will be there, representin’ for the dead kids, if full zombie attire!

Here’s the dirty deets for the release party…

Doors 9PM 19+ FREE!
Video at 9:45PM, followed by…
Hunter Eves
The State of Things
Gobs the Zombie Remix of Death on Wheels
A Primitive Evolution

The original video was made for a fashion grindhouse for l’oreal fashion week in 2007 and was the first song the band recorded. At the time the songs only lyrics were D E A T H Kill Kill, sung by what would become the Death Girls. The video featured the late Martin Streek speaking the Narrative between. Check it out below.

The new version will take a closer look at the Frakenstein Girls (aka the Death Girls) that Chiquita bonanza has created in her hearse.

Here’s a FREE JAM for APE’s album, entitled SHOW ME.

Like it? Check out the rest of the album and learn more about the band  on their WEBSITE.
The Event will kick of at 9:45PM with the screening of the new version of the video.

Hunter Eves and
The State of Things will follow.

At Midnight catch the remix of Death on Wheels by Gobs the Zombie which will lead you into A Primitive Evolution’s set!

Did I mention this is a FREE SHOW! Holy Shit!

It is very hard to perform electronic music completely live, which is why seeing Hunter perform is always an amazing show. Check her out below, performing HINDSIGHT from her album, UNOPENED BOX.

You should definately check out the rest of this album on CDBABY and get at Hunter on her MYSPACE.

THE STATE OF THINGS

This Toronto band takes influence from bands like THE KILLERS and EDITORS, but are also strongly influenced by 80s retro. Check out the video for their song, AMBULANCE CHASER, then grab the tune if you’re feeling it.

The State Of Things – Ambulance Chaser

Get at more stuff from THE STATE OF THINGS on FACEBOOK. You’ll find links to all their other pages there.

Hope to see YOU out.