Posted in CAN CON, EVENTS, ROCK

February 19 will be a special night in Toronto as friends of Peter Moskalyk, aka BELLADONNAKILLZ, get together to pay tribute and remember their fallen friend. All proceeds from the night will go to the Moskalyk family. 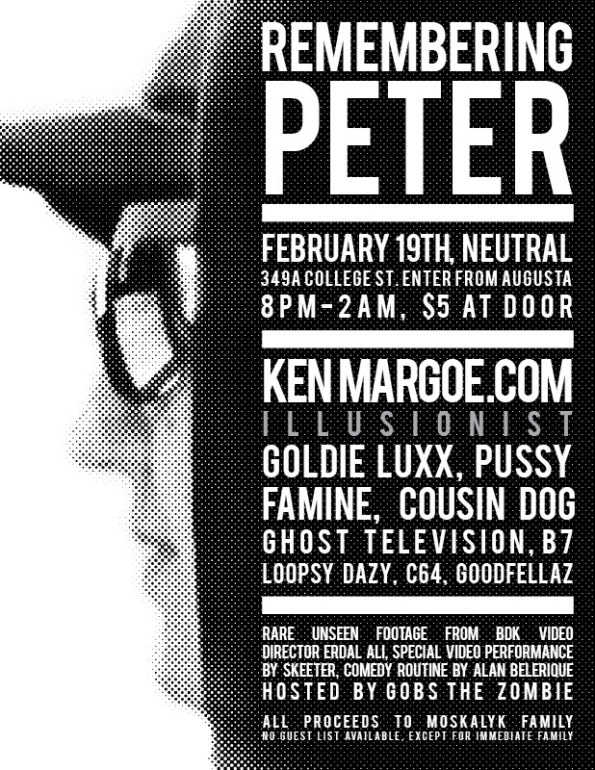 Check out some of Famine’s heavy BREAKCORE.

He also makes glitchy IDM that is quite pretty. I love artists that take noise and manage to make something beautiful from it. If you do too, check out THE DIVINE SPECTATOR AND THE 7th DAY.

Famine – The Divine Spectator And The 7th Day

You can get at more music from FAMINE on his SOUNDCLOUD or say wadup on MYSPACE.

They are often considered to be “the 9th greatest band in Toronto history”. Hahaa. Nutty.

Lot’s of their tunes are wacky Garage Rock made just for fun, like GET THAT HAT…

But they also have a deeper Emo side to them aswell. Check out TO YOU I VOW.

CousinDog – To you I vow

Here’s a clip of COUSINDOG performing Get That Hat live.

COUSINDOG have a great FACEBOOK page where you can holler at them. You should also check out their ALBUM on ITUNES.

They describe themselves as a “Live Acoustic Electronica Jam Collective”. Watch the video below and you’ll get why I’m really excited to see them perform live.

The song is called ALALIA. Like it? Grab the edited version.

You can also grab the full version of Alalia on their SOUNDCLOUD.

This event will also feature performances from…

AND the whole night will be hosted by some bozo named GOBS THE ZOMBIE.

If you’re in the area, I hope you will come celebrate Peter’s life with us.