THE ZOMBIES WERE HAVING FUN

Every once and a while, all the different monsters get together and party. For the most part, everybloody gets along okay. However, Zombies DO NOT get along with vampires! It’s like mixing a pack of rowdy, bad-ass street thugs with a bunch of puney, pretty-boy art students. Zombies are the bad-ass street thugs, btw. But, for the benefit of all the other monsters, we usually try to stay away from eachother and just have a good time. Music is real important to most monsters, and the #1 dance anthem at any monster shindig has always been THE MONSTER MASH. 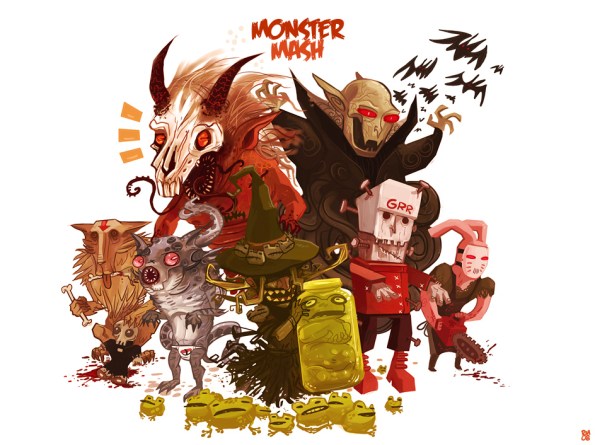 It’s like JUMP AROUND or BILLIE JEAN, to put it in perspective for you living folks. Naturally, the original BORIS PICKETT version has become a bit dated, so many DJs have taken on the task of updating. Here’s the latest…

This one dropped just in time for Halloween, this past year. It’s nothing too fancy. Just a re-drum really. No need to fuck with the classics, right? I do love how it switches from 4/4 to BREAKBEATS.

The remixer is legendary American DJ, HARDWARE. Without getting too much into his history, he has been DJing FOREVER and has played pretty much every style of electronic music you can imagine, at one point or another (even gabber). It’s PROGRESSIVE TRANCE and TRIBAL HOUSE that he became best known for. These days, Hardware does a mix of TRIBAL and ELECTRO HOUSE. He also loves to whip up BOOTLEGS, like the one above, and release them via CROOKLYN CLAN’s HOUSE MUSIC site, RATED H. You can check out more of his fun party boots there.

Find out more about DJ HARDWARE on his MYSPACE, and get at some of his tunes HERE.