Over the past 2 years, I’ve dropped JELLY ROLL ROCK a lot during live sets, before finally including it in my TROPICAL TERROR studio mix. Admittedly, the only reason I ever played it was because it’s such a qwerky, unexpected thing to drop with UDACHI‘s JELLY ROLL, which is one of my favourite tunes of the past couple years. 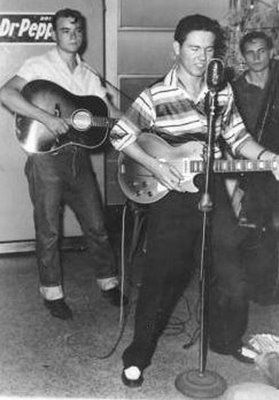 This song is not important in the history of modern music, by any means. BUT, it does have quite a cult following within the ROCKABILLY scene. Originally released in 1958, it was a very rare recording for a long time. An original 45 pressing of the single is sure to result in some hefty bidding amungst original Rockabilly collectors. The song itself, however, is no longer difficult to find, thanks to many rare Rockabilly compilations, released both on vinyl and CD. It’s become particularily accesible now that there are assholes blogging about the tune and putting it up for free download. Speaking of, here it is…

So simple but soooo good.

Drop The Lime, get at this!