TOO MANY MAN in BOY BETTER KNOW

I’m just saying, for such a large group of MCs (9 contributing members), who’s biggest tune is about there being too many dudes on the dancefloor, you’d think they’d have atleast one girl in the group.

Anyways, I thought we should get some GRIME into the GARAGE/GRIME category, and since this is a first contribution, I’ll start out with my personal favourite grimey jam. It’s a big big choon, by a big big group (both in size and popularity). 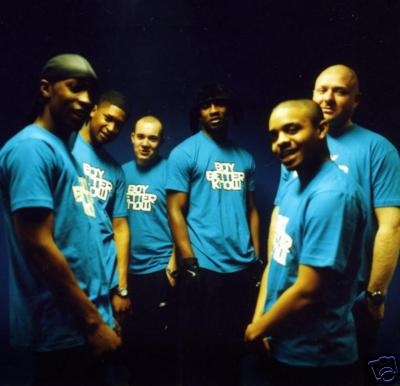 They formed in 2005, and several of the members have become the biggest names in Grime. Check out the MUSIC VID for TOO MANY MAN below, to get to know some of dem…

This jam is pure fiya, and the subject matter is about something we can all relate to. EVERYBODY dislikes it when there’s too many guys on the dancefloor. I’ve seen it happen too many times. A couple of single guys will have the balls to join the ladies on the floor, which is totally cool of them These guys tend to be confident and charming and are actually there to have fun and enjoy the music, rather than pick fights and date rape women. Unfortunately, the act of confidence encourages other guys to hit the floor, seeing that it is safe to do so. The influx of testosterone starts to scare all the chicks away, and next thing you know, it’s all dicks on the dancefloor.

Too Many Man, aside from being a great tune, has become almost like a DJ Tool, dropped when this phenomenon occurs, to playfully point it out. I make sure I’ve always got it with me, just incase the need should arise. Now you can have it too.

Boy Better Know – Too Many Man

You can learn more about BOY BETTER KNOW on WIKIPEDIA, like dem on FACEBOOK, and there’s so much more killer jams by dem for you to check out HERE.