BACK WHEN ELVIS WAS KING

I only discovered recently that I heart ELVIS PRESLEY. You see, my view of him was always tainted by the cheesy movie soundtrack songs that he made in the 60’s and the horrible, over the top love ballads that he sang in the 70’s. But then I discovered a CD comp called ELVIS PRESLEY HITS OF THE ’50s, and gave it a listen. Wow! No wonder they called him the king. 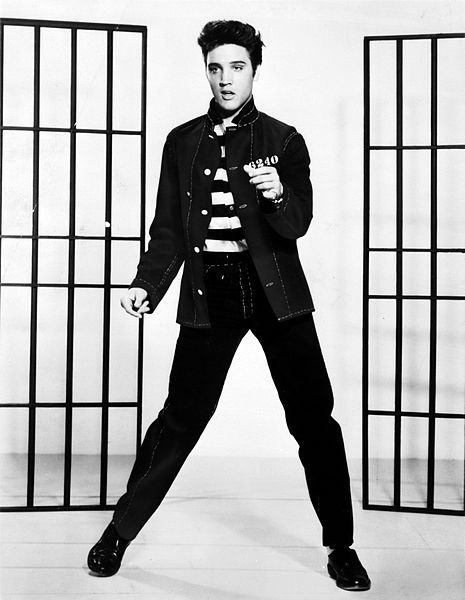 There’s 64 songs on the comp and it’s amazing how much variety there is in his music. It’s also amazing how many of the songs are some of the most recognizable and beloved oldies of all time.

Instead of giving you one of his big hits, I’m gonna go out on a limb here and offer a lesser known Elvis jam. It’s his version of BLUE MOON, a song made popular by THE MARCELS, and recently made awesome by BABY CAKES.

While the Marcels version was upbeat and happy, Elvis’ take is very deep and beautiful. I’ve always been a fan of eerie beauty, and this song has it down. There’s something so magic and pretty, but dark, happening. It’s hard to pinpoint exactly what causes this effect, but I’m sure you’ll agree it’s there. Don’t bother listening without a bass bin. The bassline of this song carries the whole melody and feeling. Now, let’s do this!

Damn. It gives me chills every time I hear it. You?

So with out saying, you should check out the rest of the CD COMP. Also, HEADUCATE yourself by reading up on ELVIS PRESLEY and BLUE MOON.

If you don’t know Elvis, your parents did a shitty job.