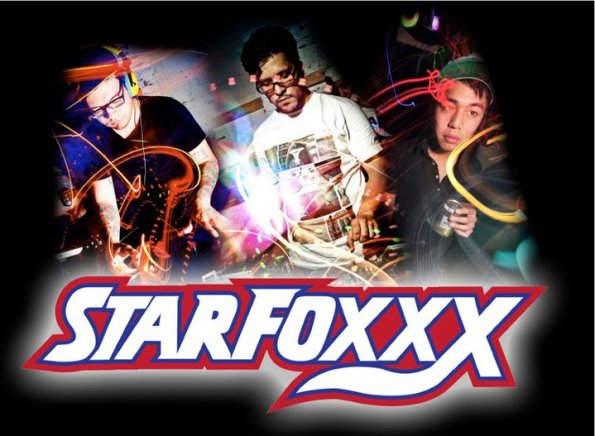 STARFOXXX are 3 guys out of Chicago that are rapidly rising to fame for their JUKE remixes of popular dance jams. Along with them, Juke, a sub-genre of GHETTO HOUSE (or BOOTY HOUSE), is finally gaining worldwide attention.

Juke has been around since the early 90s, but only recently has it begun to spread outside of it’s Chicago home in any major way. Not just across North America either, but all over Europe aswell. It’s accompanying dance style, known as FOOTWORK, is also rising in popularity along with it. What is Footwork? Shit, that’s tough to describe. It’s kinda like really really fast breakdancing. Ya know what? Here’s an okay video clip of some…

Starfoxxx has taken the usually very minimal sounds of traditional Juke, and injected it with influence from all sorts of other genres of music, to create very unique sounding, but undeniably ghetto jams.

Here’s my favourite from them so far….

It’s their Juke REMIX of the 12TH PLANET & FLINCH remix of APOCALYPSE THEME by DAVE NADA. What? Yup, it’s complicated. They’ve taken a DUBSTEP track, already filled with BMORE influence, cranked it up to GHETTO TEK speed, and added in a bunch of TROPICAL BASS elements. To me, this actually sounds more like POWER SOCA then Juke, but it’s all goodness, whatever the hell you wanna call it. Now listen…

I think this track is a good reason why we just need to officially declare genres to be dead. This track doesn’t fit neatly into any package, and there’s so much music like it flowing out these days. Let’s just label something “good” or “bad” and leave it at that. Until we all agree on this, I will sit this track in the REMIX category.

You should add STARFOXXX on FACEBOOK and TWITTER, snatch up their first EP, LA CONTRADANSA, and hit up their SOUNDCLOUD for loads of amazing Juke remixes, and lots of other goodness aswell.

I think if I tried to do footwork, my feet would fall off. It’s not easy being rotten.