CHILDREN OF THE NIGHT & SCOTT BROWN

This past weekend, DAYDREAM PRODUCTIONS threw the biggest Toronto rave in years. The lineup was filled with legendary DJs, including SHARKEY, making a stop on his retirement tour, and one of my all-time favourite’s SCOTT BROWN! I ressurected myself for one night, to host the event as MC GOBSTOPPA. It was great to be back on the Opera House stage. Plenty of oldschoolers came out, and we partied just like back in the day. I don’t think I’ve ever been so drenched in sweat, and I loved it. 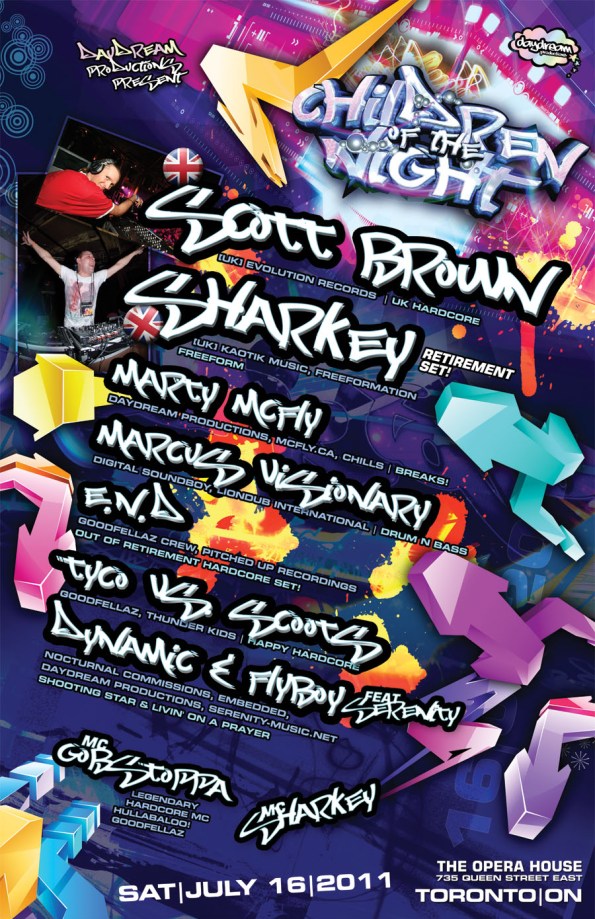 It’s been 5 years since “the undisputed king of the hardcore beat” has graced a Toronto stage, and I got more and more pumped for it as the week drew closer to the date. I found myself digging up some exclusive Scott Brown material that I had hiding on my drives, from years ago, and now that the insanity of the weekend has settled, I’m gonna finally share these recordings with all of you.

2 full hours of Scott Brown featuring a live set from Illinois, with MC E.N.D. on the mic, broken up by THE MOST RIDICULOUS AND DRUNKEN INTERVIEW EVER, and followed by a 30 min tribute set spun B2B by the whole TSR crew.

This episode is essential listening if you want to know why whenever I MC for Scott Brown, I wear a sock with a great big hole in it, and Mr. Brooon inevitably ends up ripping that sock in half.

This one features Scotties live set from GOODFELLAZ in 2003 with MCs E.N.D., HI IQ, and some jerk named Gobstoppa, plus a very cheeky fake interview that caused a bit of controversy between Scott Brown fans and the TSR crew. The ep also starts off with an exclusive 30 min set by DJ Virus.

Just before TSR got cancelled, I recorded most of the Hard Dance stages sets from Saturday night of WEMF, with the intention of playing them on the show. Needless to say, they never made it on to the TSR stream, and I didn’t end up doing anything with the recordings, but it’s time to change that, atleast in the case of Mista Brooooon.

This is a never before heard hour of Scott Brown in what would be his last Toronto appearance for 5 years. It’s got yours truly, MC KNOB GOBBLER on the mic, with an outro featuring my ripped sock, and some words by the man himself.

This weekend was epicness to the max. I hope I don’t have to wait another 5 years to party with Scotland Brown again.