I’ve listened to a LOT of MIXTAPES this year, but my favourite of 2011, thus far, is a recent FEIDED PODCAST by none other than my homeboy, PROPER VILLAINS.

Before we get into the mix, you’d better check out his collab with myself and MIKE DEXTRO. It’s a “Tribal wobble rave banger” titled WHOA!-JAK. 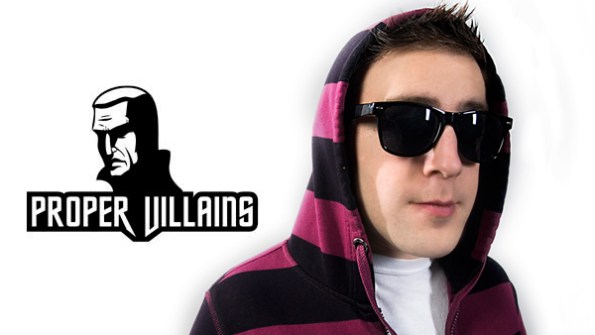 This New Yorker describes his sounds as “Bass-ey awesomeness”. If I may deconstruct this statement, I think it means that he combines POP music elements with the dirtiest of DUBSTEP sounds and arrives at a combination that creates mayhem on dance-floors.

He knows what makes people dance, and his live mixes are filled with the unexpected, as he weaves his way through various different genres of bass-heavy music, dropping in surprise jams that seem to come out of nowehere, but end up working perfectly as a segway into the next set of slammers. You never know what’s coming next, but you know that it’s gonna be… well, bass-ey awesomeness. Ha!

This mix is just amazing. Lots of different genres are represented here, and every single track is a red hot burner. There’s even a certain SKRILLEX MOOMBAHCORE REMIX by ya boy, Gobby Z. Just sayin’. Check it out.

HIGH POINTS: Wow! What a fun ride. In just under an hour you will hear Dubstep, DRUMSTEP, DRUM N BASS, MOOMBAHTON/MOOMBAHCORE, MASHUP, a bit of HIP-HOP, some OLDSCHOOLY RAVE business, and even a PUNK ROCK classic. Whoa!!! But what I love the most about this mix is that it’s versatile, not only in the multiple genres it flawlessly blends between, but in the content of the individual tracks aswell. There are tunes by rising stars set next to those by the biggest names in the game. There are brand new bangers aside big jams from a few years back. Sounds of the future are combined with odes to the past. Serious trips flow effortlessly into fun pop tunes. The biggest bangers of the year combine with the latest underground sensations. Every track stands out completely on its own. While most DJs focus on brand new tracks, or songs that all fit into a specific genre, Proper Villains’ only concern, when selecting tunes for his mix, is that they all make you dance your ass off, and that’s it!

LOW POINTS: When making a mixtape that contains many different genres, it is important to combine certain tracks with similar sounds into tightly woven and deliberate vignettes. If the genre completely changes every few minutes, the mix just sounds like chaos. There is no flow, and it’s off-putting to most listeners. Your transitions need to be smooth enough that the listener can follow along effortlessly with the changes. For the majority of the mix, this is achieved to near perfection, but in the last 12 mins or so, PV switches sounds at an erratic pace. We go from Dubstep, to DnB, to Drumstep, to BREAKBEAT HARDCORE, to punk, with every track alarmingly different from the last.

I’ve heard a lot of mixes over the years, where the selector has a real nice flow going for most of the set. Then, towards the end, they decide to tack on a bunch of tunes that they wanted to drop, but couldn’t find a place where they fit. Time is running out, so they just jam these misfit tunes together. The beautiful flow of their set is lost and it ends up being an unfortunate closer to what would have otherwise been such a masterfully constructed ride. I’m not saying that this was the case for this particular mix, but that’s what it sounds like, and it’s a shame, because that PENNYWISE tune at the end of the mix is such a dope ending! It’s an unexpected and thuroughly enjoyable surprise that really makes the mix go out on a memorable note, leaving me wanting more. This was still achieved, but it would have had even more impact if the flow hadn’t wavered up to that point.

Ofcourse, the above low point wasn’t enough to keep this mix from being my favourite of the year. I love every single tune on it, and am amazed by how PROPER VILLAINS was able to fit them all together so well. You’d better learn some more about this man by visiting his WEBSITE and snatching up some more of his tunes HERE.

Yo Shulz, I’m in New York now. Let’s get together and shoot the shit!