It was almost impossible to escape last years smash hit, Like a G6, and Far East Movement is following up the record with a hot collab alongside Baltimore Native Rapper RYE RYE: JELLO! 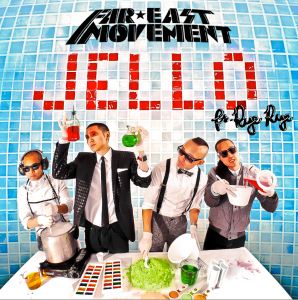 The group, abbreviated as FM, is an Electro Hop quartet from LA, comprised of Kev Nish, Prohgress, J-Splif, and DJ Virman. They first made their mark on the pop music stage with 2006’s Round Round, but I first started to notice them with the heavy airplay of late 2009’s Girls On The Dancefloor, shortly after a major appearance with Jay Z at one of the biggest hip hop events on the west coast.  After a wildly successful stint on LMFAO’s  party rock tour, they signed with CHERRY TREE and INTERSCOPE RECORDS, who released their first major album, Free Wired in 2010.

By the release of the single Like a G6 in October 2010, the group had already gained a lot of attention, and the hit release featuring Dev and the Catarcs propelled to number one on the charts. This was a major accomplishment for FM, as they became the first Asian American group to earn a top 10 spot on the Mainstream Pop Charts. By November, the single had gone double platinum, selling over 2 million copies. FM followed this up with singles Rocketeer & If I Was You (OMG) ft. Snoop Dogg. After hitting the road for the Free Wired World Tour, they began working on their second album for CHERRY TREE, and Jello is just a preview of what is to come. Obviously hooking up with RYE RYE as a guest vocalist was a great choice. I’ve had the pleasure of seeing the wildly energetic rapper and dancer a few times and she never disappoints.

Check out the tune: