DEFUNCT! PUTTING THE BOOM BACK IN YOUR AFTERLIFE

While I’ve never met either members of DEFUNCT! in person, I’ve considered them to be FRIENDS OF DEAD KIDS for quite some time. 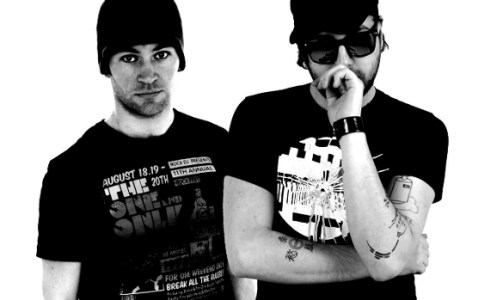 They are 2 guys, one hailing from the USA, and the other from Britain. I came across their MYSPACE page when the short lived “FIDGET HOUSE” sounds were just starting to form into a scene. I was cray about this new style of HOUSE music and Defunct! were pioneering it. After a couple of “wadup” messages, they were nice enough to send me a couple tunes, and I’ve been a big supporter of them ever since.

A few years later, the Defunct! sound has morphed into a jackin’ ELECTRO style of House music. Their ability to simultaneously incorporate trends happening on both sides of the pond has given them a unique edge that has been recognized all over the globe. This Trans-Atlantic duo have also recently left the safety of their House music bubble, to team up with two Detroit based artists, ELECTRO-HOP ground blazers, FLYING WITHOUT WINGZ, and legendary DJ/Producer, TERRENCE PARKER. Together, they’ve created a dirty DUBSTEP excursion, called PLAYDATE (YOU’VE BEEN TPED). It’s deep and dark, at moments, and fun Bass Face inducing filth at others. Check out the official MUSIC VIDEO below, and then hit the tune up, if you’re feelin’ it.

“Put your feet to the ground and your hands to the sky, because Defunct! is here to put that boom back in your life.” Maybe I should have just written that.