This is gonna be the second OPENING CEREMONY MIXTAPE that I’m writing a review for IN A ROW. What a brilliant series it is! 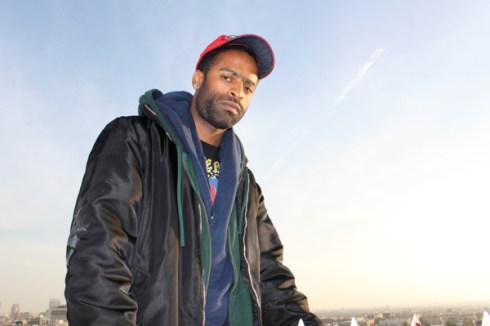 He is an unsung hero of the Los Angeles underground club scene. You’ll find him causing panic, and other intense emotional responses, at many of the hottest events in the city. A member of the FADE TO MIND CREW, alongside KINGDOM, NGUZUNGUZU, and MASSACOORAMAAN, TF tends to miss out on the media attention that his producer partners recieve, but when on the decks, he takes complete command of the dancefloor, with all eyes and ears fixated on him. As a true catalyst for DJing as an art form, TF takes his mixes to sonic spaces that few DJs ever tread. His OC Mixtape is an impeccable example of his fearless and undefinable style.

This is an incredibly complicated, deep, and personal excursion through the mind and soul of Total Freedom. <With a description like that, you would expect something in the realm of ambient sound scapes, but you’d be wrong. Total Freedom manages to get deep while also laying down a set of killer riddims and heavy beats. Sweaty ass shaking and booty bouncing are met with moments of reflection. I’ve never used the term “emotional rollercoaster” to describe a mixtape before, but it’s actually an apt description, in this case, all be it a bit cliche. This mix is not for the faint of heart, as it traverses through “grime, R&B, new age, drum & bass, hardstyle, and tropical bass, not to mention a litany of indefinable points in between”. – THE WALDORF HOTEL. Be adventurous and give it a spin.

HIGHPOINTS: Take a good look at the TRACKLIST. You will see a clear reflection of the mix itself, in that it is very complex. TF goes above and beyond the usual act of blending songs together. In this mix, he is creating music. It’s a tapestry of sounds, where it’s impossible to tell when one track ends and another begins. Total freedom lives up to his name in delivering the most adventurous mix I have ever had the pleasure of listening to. The most surprising part has to be at around 10:35, where TF takes us from TROPICAL BASS, to HARDSTYLE. This is mindblowing for me. Hardstyle is generally looked down upon in the world of Bass music, but TF either doesn’t give a fuck, or he recognizes that 2012 is going to be the year for Hardstyle, and he’s already ahead of the game, OR he just has the bravery to dare to make an attempt at changing the minds of staunch Bass heads by hitting them with a couple surprise selections of Hard Dance that move him. Whatever the reason, it’s an incredibly bold move.

The DRUM N BASS section that first comes to light around 28 mins is another astonishing twist. TF does a long blending of tunes so graceful and gradual that you don’t hear or notice the tempo change at all. It just hits you, part way through, that you are now listening to Jungle. This is followed by the most delightful surprise of all. TF gets personal in the mix by loosely dropping in the vocals of a track that he lists as the “SADDEST SONG IN THE WORLD EVER”. It’s WHITNEY HOUSTON’s I WILL ALWAYS LOVE YOU. Now, this mix was released before her passing so this was not a “topical” drop by any means. This song is in the mix because TF is moved by its beauty, and he even adds to it, with a layer of whispy reverb that trails off into nothingness. In light of recent events, this moment serves as an unintentionally beautiful tribute to the now late songstress. In good taste, TF follows it up with another surprise, in the form of an accapella ripped from a YOUTUBE clip, that eventually blends with some very funky GLOBAL BASS, to end off the mix on a dancefloor friendly note.

During the above instances of loosely layered accapellas, aswell as in his transitional soundscapes that taxi us between different styles of music, TF demonstrates a unique ability to blend songs without being confined by tempos. Most DJs are unable to break away from the pace of a songs rhythm. In succesfully doing so, TF shows a true transcendence in the art of DJing. He is able to take a set wherever he wants it to go, and brings the listener along with him.

LOW POINTS: Regardless of your intentions, a mixtape needs to have a strong opening. If the first sounds don’t define your mix, as a whole, they atleast need to build excitement through a promise of things to come. I’m sorry to say that I find this mix starts out weak, aswell as being misleeding. The opening kalimba like twinklings suggest, to me, that I am about to hear some gathering of experimental selections, with a World Beat feel as the defining element. A couple minutes later, I’m struck with infectious percussion and I discover that this is not the case at all. Luckily I took the time to press on. Most people wouldn’t. In the instant gratification cyber world, the time you’re given to compell your listener is very short. It certainly would be a shame if open minded bass heads are missing out on an uplifting experience because they were too impatient to work their way past the awkward beginnings, but the reality is that’s the audience that you are dealing with, and they need to be catered to, atleast at the start.

I certainly hope that anyone who has read this far will take the time to actually listen to this mix, rather than just put it on as background to an array of multi-tasking. This one is worth it! I’ve definately never written so much about a mix before.

In conclusion, not more than a couple of years ago, I may have crucified this mix for being far too random. Yes, the blending is executed flawlessly, by Total freedom, but the sound changes constantly. This used to be a real problem for me, but I feel like maybe this type of mix has reached a level of maturity, largely due to the efforts of trail blazing artists like TF. It’s a very fresh take on the traditional DJ mixtape, and I’m excited to hear more mixes like this.

The times, they are a changin’, yeah?