I CAN SEE THE FUTURE IN SAZON BOOYA'S EYES

The weather is mighty nice in NYC. Let’s get TROPICAL! 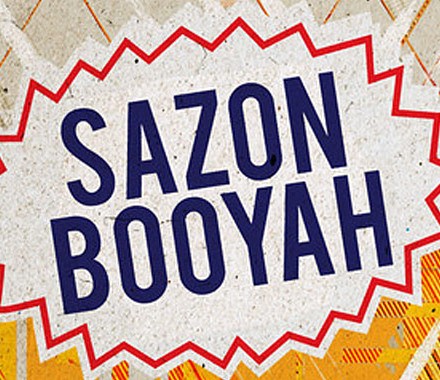 MR. VEGA & SAV were two DJs making their own way through New York City’s EDM scene, until they met at a movie screening, and discovered they both shared some common, but essential priorities in life: Sex, Money, Music, and making asses shake. That was enough to spawn some producing sessions together. It was by accident that they stumbled upon an affinity for MOOMBAHTON, but it only took one song for them to agree that this new emerging genre of dance music would be their focus, and from there, SAZON BOOYA was born.

In the past year, SB have gone from begging for bookings, to opening for SKRILLEX, at his most recent NYC appearance. Sazon Booya are making a style of Moombahton that combines PROGRESSIVE HOUSE and OLDSCHOOL LATIN music. It’s highly appealing, particularily to people that are not normally into EDM. If anyone in the Moombah-scene is destined to cross over into the mainstream, there’s a good chance it will be Sazon Booya.

So what is it that makes SB’s sound so appealing? Simply put, it’s FUCKING SEXY! Case in point? Press PLAY below.

Diva’s to the dancefloor, please!