THE PRODIGY & THE KFC TUNE

I’ve got a VINYL RIP for you that is wonderful, mysterious, and super rare! This is what record collecting is all about. 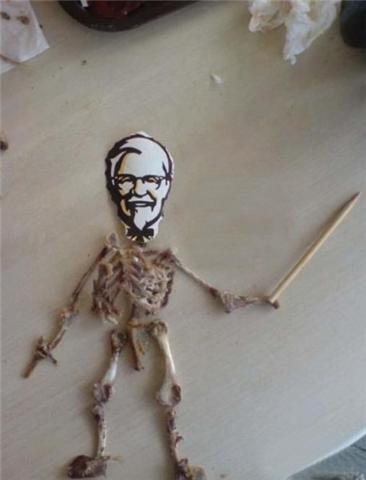 In the early days of the MASHUP scene, a white-label vinyl circulated, in very limited quantity, amongst the Bootleg DJ community. The only info on the record was the words, “The KFC tune”. This referred to the A side single, a MASHUP of MARLENA SHAW’s CALIFORNIA SOUL, with “finger lickin'” lyrics by WARREN G, from a 1994 track, titled FLOW ON. Marlena’s song was used in a KFC COMMERCIAL, which inspired the  mash.

The real gem of this 4 track vinyl is the first tune on the B side. A version of THE PRODIGY’s OUT OF SPACE, with the MAX ROMEO, CHASE THE DEVIL breakdown extended. I’m sure I’m not the only DJ out there that always invisioned such a thing. I absolutely lost it when I heard it executed for the first time. The edit is simple, but extremely effective. I’ve been told that it was Mashup kings, TOO MANY DJs, that first popularized this jam, and turned The KFC Tune into a sought after collectors item, because of the Prodigy rip. Can anyone confirm???

The artist(s) behind the record remain anonymous to this day, at least as far as I know. All tracks might all be by a UK DJ by the name of DOCTOR GOLD. He definitely did the Marlena/Warren mash, but the rest of the record may be a compilation. I intend to get to the bottom of this. Until then, enjoy the below MP3 of the Prodigy/Max Romeo rip, cuz there’s no way you’re finding this shit on wax!

DOWNLOAD: Anon – Chase The Devil Out Of Space (The Prodigy x Max Romeo) (RIGHT CLICK>SAVE AS)

Is anyone else craving KFC now???