I consider ORIGINAL NUTTAH, the 1994 classic JUNGLE anthem, by SHY FX & UK APACHI, to be the greatest DRUM N BASS track in history. 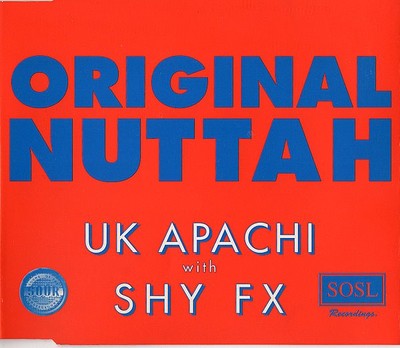 It’s a difficult point to argue, because it really is a very subjective thing. But I CAN make a few key points in its favour.

There is very little EDM that can be described as “timeless”. Original Nuttah still whips crowds into a frenzy today, just as it did back in ’94. It’s a song that is best played in it’s entirety, rather than mixed into a DJ set. The time-stretched GOODFELLAZ sample at the head of the track is a wonderful and familiar anticipation builder. Then, the energy hits immediately. Few DnB selections have ever been able to achieve the energy of Original Nuttah. Everything about it just builds excitement. It’s the CYPRESS HILL SIRENS, combined with Shy FX’s erratic breakbeat chopping, the infectious and huge bassline, and the speed of UK Apachi’s flow. The lyrics defy the rules of Pop Music sensibilitie’s, by being difficult to understand. I say it defies them because it’s a song that everyone seems to sing along to, despite the fact that nobody knows what the words are. It’s a wonderous phenomenon.

Now, 18 years after it’s initial release, Original Nuttah remains to be one of the most mainstream popular Drum N Bass selections of all time. It came out in a crucial period when the Jungle scene was gaining momentum and in need of some key pieces to establish it as a solid musical genre. People always hold a soft spot in their hearts for their first time, and for many DnB enthusiasts, Original Nuttah was the first jungle selection they ever heard. For those people, it will always evoke fond emotions.

Check out the MUSIC VIDEO below. Yes, it’s super cheesy, but an important landmark, nonetheless, being that it’s likely the first DnB vid to ever be aired on cable television.

And for those of you Junglists that are, for some reason, missing this tune from your collections, here is a RIP of my own VINYL copy. Proper!

You know why? It was outta respect.