I’ve received so much awesomely filthy ELECTRO, since the release of VOL 4. It was tough to narrow it all down. But what I’ve arrived at is the cream of the crop, for sure. I wonder if there’s something about the late months of the year that brings out some extra trashyness in HOUSE producers. 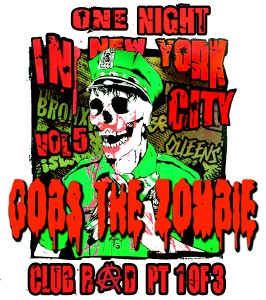 To celebrate one year of his ONE NIGHT IN NYC quarterly mix series, Gobs has returned to the filthy ROCK N’ ROLL vibe that drove the ORIGINAL VOLUME. Trashy, thrashy, messy and sexy. The Mayan Calendar has officially ended, and this is the ideal soundtrack to an entire night of wild partying in post-apocalyptic New York City, condensed down into a high energy, 26.5 min ride.

VOL 5 of the series also marks the beginning of an exciting new trilogy. In “CLUB BAD”, Curtis Jones (aka GREEN VELVET) is our tour guide, as we travel through a circus side show of substance abuse. For this, and the next two volumes of the series, we will watch bad little kiddies doing bad little things. “Cameras ready. Prepare to flash”!

***If the TRACK TITLE is highlighted, CLICK for a page where the full tune can be downloaded. I will update this article as more tunes get posted on DKGL, so do check back***

Follow OLIVER CHESLER on a drug quest through the boroughs of NYC. This is a concept that Gobs wanted to execute for quite some time, and after 9 long months, it’s finally completed. Enjoy the entire story, woven between the filthiest, and most fun Electro jams to enter Gobby Zs collection, over the course of the past year. The result is over an hour of trashy, thrashy Electro, infected with The Zombie’s high energy style, and united by a common theme. Gobs hopes you will enjoy this Trilogy again and again.

PART 2 of CLUB BAD will be released in late March of 2013 (if the world still isn’t over by then).