In the early 80’s, Florida was a very uninteresting place. From sheer boredom, teenagers lashed out violently, which eventually led to a vibrant PUNK ROCK scene, with its own unique style and sound. But before anyone else was doing it, there was ROACH MOTEL. 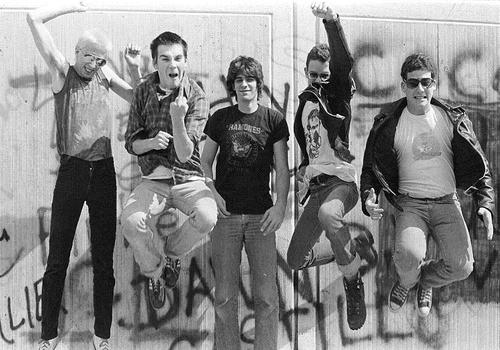 Never heard of them? There’s good reasons for that. The band was only together from 1980-1984, and hardly released any recordings. Only 2 EPs, in fact, which are now 2 of the most collectible VINYLS in the history of Punk Rock. After less than 4 years of playing bar shows, and saving money to release a full length album, guitarist, Jeff Hodapp, graduated college, and left the band to move south and pursue a career. Hodapp had been solely in charge of the band’s bank account, which he transferred the rights of to bassist, Eric Engan, upon his leaving. Engan swiftly emptied the account and disappeared. With the original guitarist and bassist now gone, and no money to release an LP, the rest of the band packed it in, and moved on. Before it all fell apart, they certainly managed to leave their mark, taking early steps to lay the foundations of what would become a viable music scene. They toured with BLACK FLAG, exposing the sounds and culture of HARDCORE PUNK to frustrated Florida youths, and ran their own label, Destroy Records, which released a compilation album of Florida bands, titled “We Can’t Help It Were From Florida”. “They evolved quickly from an untalented drunken local band to an untalented drunken band that had a couple of records out and had played with the DEAD KENNEDYS, Black Flag and MINOR THREAT“, drummer, Frank Mullen, told PRICK MAGAZINE, speaking in 3rd person. Humble words for a member of a band cited by Punk legends, IAN MACKAYE and JELLO BIAFRA, as influencial.

30 years after their only releases, Roach Motel reunited for several shows, and to put together an album of their best recorded work. IT’S LONELY AT THE TOP contains songs compiled from their 2 EPs, label compilation, 2 live recordings, and material from their unfinished album. I have one of the only 1000 copies of this LP, and I’m gonna share a couple of VINYL RIPS with you.

MORE BEER was a fan favourite of all their works, for obvious reasons. It’s rowdy fun, and easy to croon along with, no matter how drunk you are.

A fan fav, yes, but that tune is so bloody simple, I can’t have it as the soul example of Roach Motel’s music, so I’m also offering their most notable “hit”, which expresses the sentiments of early 80’s FL teens, with all the necessary angst. The song is titled, “I HATE THE SUNSHINE STATE”.

2 Responses to HEADUCATION: WHY PUNKS DON’T KNOW ABOUT ROACH MOTEL