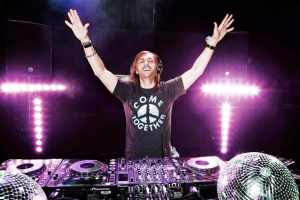 For this month’s instalment of Museum Mondays, Wax Museum decided to profile one of the DJ/Producers responsible for the surge in electronic influenced Top 40, David Guetta.

For a little history on Guetta, we can look back to 2002, when he released his first single that caught the attention of house heads world wide, the title track from his debut studio album “Just A Little More Love.” As we chronicle his major releases, you will see that this sound was very different from the songs we see him producing today – with or without a famous Top 40 vocalist.

As Guetta developed a more electro than house sound, we saw 2004’s release of “The World Is Mine” have a major impact on the music scene, except it wasn’t until 2007 that this song was officially release in the US, thanks to international EDM institutions like BPM. This release climbed to the top of the Billboard Hot Dance Airplay chart in June of 2007, which at the time was a follow up to the success of “Love Don’t Let Me Go (Walking Away): A 2006 mashup of Guetta’s 2002 track “Love Don’t Let Me Go” ft. vocalist Chris Willis and Tocadisco’s remix of British EDM band The Egg’s single “Walking Away.” This was around the time that Guetta became a trusted name in electronic music to DJ’s across the world, and around the time Wax Museum recalls noticing Guetta’s songs and assuming their playability before even listening to the track.

Later in 2007, Guetta released his third studio album “Pop Life,” which boasted the single “Love is Gone.” While this track became part of the Top 10 in many countries across Europe, it was also his breakthrough into the North American music scene, debuting on the US Billboard Hot 100 (However, it only peaked at 98). We would credit this anthem as the track that initiated normal Top 40 club goers to actually request something by Guetta, which was a pleasure, as the top tracks that year were songs like “Big Girls Don’t Cry” by Fergie and “Buy U A Drank” by T-Pain ft. Yung Joc. ViVi remembers that it was just when she got into playing Top 40 music, and had to record a demo for a potential booking…… She lead off the demo with Love is Gone, and lo & behold, she got the gig. For a crowd known for loving terrible late 2000’s hip hop, this was definitely a sign of things to come.

Now we come to 2009, the year that Guetta gained international fame. Depending on your views, this year saw the smartest venture for the to be king of Top 40 electronic music, or the worst sell out of any EDM producer. First he teamed up with former Destiny’s Child sensation Kelly Rowland to create the track “When The Love Takes Over” (Interesting fact, this track was co-written by NERVO, the producers of 2011’s electro house anthem “We’re All No One”) Wrangling a Grammy, Guetta capitalized on this track with the one song we think many people would credit as the pivotal point when the lines between electronic music and Top 40 recording artists became blurred: Sexy Bitch.

The uptempo electro house song featuring Akon incorporated many urban elements to create a mainstream anthem for the EDM lover. Peaking at number 5 on the Billboard Hot 100, this song sparked a trend amongst Top 40 artists like Black Eyed Peas and Lady Gaga. While the track may be classified as an electro house song, it was solicited to radio stations as a dance song that was engineered for a generic audience. While accompanied by a driving 8-bit style beat, it is set in a common time signature of 130 bpm, and it’s melody consists of a basic pattern of open fifths instead of chords, a prevalent trend in electronic recordings by mainstream artists. After this track went triple platinum, it seemed as though David Guetta had found his niche, if you consider that most EDM artists were not teaming up with Billboard Hot 100 artists, or perhaps an anti-niche, if you consider he took a sound reserved for electro lovers and brought it to stereos everywhere. Either way, the success of this song and corresponding album “One Love” definitely paved the way for artists to create the no longer unique mashup of Top 40 and EDM. The album saw four more major match-ups with Estelle’s “One Love,” Chris Willis, Fergie, & LMFAO’s “Gettin’ Over You,” Rihanna’s “Who’s That Chick?” and of course Kid Cudi’s “Memories.”

And that brings us to the release of “Nothing But The Beat” in late 2011, now a time when there is no longer a clear division between what is electronic dance music and what is Top 40. Artists like LMFAO and Afrojack have capitalized on the trend and subsequently forced popular music to adjust to it. Teaming up with the world’s premier vocalists, Guetta released 5 singles that ALL became Top 10 hits world wide, many debuting in this position. It seemed as though the mainstream music junkies had truly embraced, not just accepted this style. Leading off the album was “Where Dem Girls At” a collaboration with Flo Rida and Nicki Minaj, both singing and rapping over the heavy electro beat. Next we saw “Little Bad Girl,” a very similar track with vocals by Taio Cruz and a rap by Ludacris. The following 3 singles, Usher’s “Without You,” Sia’s “Titanium,” and Nicki Minaj’s “Turn Me On” all embodied the same  urban-dance sound that Guetta had become famous for, and all reached the Top 10 on the Billboard Hot 100. An interesting note about “Titanium” is that the vocals, although written by Sia, were originally record by Mary J. Blige and actually offered to Katy Perry, but upon Perry’s refusal to do a song with Guetta, and Guetta’s love of Sia’s unique voice and persona as an indie artist, he decided to stay with her version. Wax Museum is certainly glad he stuck with Sia, as it would be much harder to really enjoy the song if it’s powerful vocals were recorded by bubblegum pop princess Katy Perry.

While David Guetta’s much anticipated follow up to “Nothing But The Beat,” may not be in the works yet, it hasn’t stopped Guetta from continuing to capitalize on the trend he pioneered. In 2012, Guetta was featured on Ludacris’ track “Rest Of My Life,” creating an instrumental of epic proportions, as well as Rihanna’s EDM track “Right Now.” This was a major flip in the industry, as the EDM producer was now the feature, as opposed to the vocalist. Guetta had clearly made himself a household name, as it is very rare for a producer to be credited in the song’s title. Just take Dr. Luke for example, someone we previously discussed, who has yet to be credited in the title on one of the countless Top 40 anthems he has written and produced for today’s major artists.

Guetta’s most recent single comes from “Nothing But The Beat 2.0,” titled “Play Hard” The song samples Alice DeeJay’s “Better Off Alone” and features Ne-Yo & Akon as vocalists. The official video is set to be released later this week, which may help with the poor chart positions of this tune thus far.

Etro Thinks: In retrospect it’s easy to say Guetta sold out, but as an artist who had an opportunity to move up the ladder it’s hard to fault the guy. Sure, he teamed up with some popular Top 40 artists but the sound he produced was something new for the mainstream. It could have flopped but it didn’t and I give full credit to Guetta for his formula that is resonating throughout dancefloors today. He has opened the door for so many producers and for Electronic music in general. I tip my cap to Mr. Guetta.

ViVi Thinks: David Guetta is the embodiment of the age-old question: What constitutes as a sell-out? On one side, I believe he was one of the people who brought EDM to Top 40, and that is a huge achievement. If the sound he generates now was the sound he had originally sought out to make, then obtaining commercial success is something most of us only dream of. On the other hand, with the exception of Sia as a vocalist, simply choosing Flo Rida and Nicki Minaj to be featured on your track BECAUSE they are popular and NOT because they are talented is a sure sign you’ve sold out. Imagine Guetta had been massively popular without the assistance of these artists, and we’d had talented singers and songwriters working on his tunes instead, like producers Swedish House Mafia, Avicii, and Calvin Harris do. These artists are now creeping into this section of non-Top 40 that receives high radio play and requests rates. Or maybe that is Top 40 now. I don’t know. Music is barely able to embody a genre anymore, and whether or not this is a good thing…. I’ll have to wait and see.

While on the topic of Electro House tracks becoming Top 40 anthems, many would credit Benny Benassi as the forefather of this trend with his 2002 track “Satisfaction” bringing it into the mainstream. Benassi’s debut single from the 2003 album “Hypnotica”, and most successful song to date, HAS ONE OF THE GREATEST VIDEOS EVER. Having been a house DJ since the late 80’s, Benassi made the jump from house to electro just as a new generation of EDM lovers were emerging, wanting to separate themselves from the monotonous tech house sound popular at the time. However, this didn’t stop high-profile house DJs such as Carl Cox and Rogers Sanchez from applauding this anthem and giving it solid play. Hitting the radio waves shortly there after, this track is still an anthem, over 10 years later, we’re wondering when Pitbull or Flo Rida are going to sample it for their new banger. Oh wait, Pitbull and Flo Rida  already did in 2008 with “Move, Shake, Drop” by DJ Laz. And of course, Flo Rida, the KING of originality did AGAIN in 2009 with “Touch Me” ft. Ke$ha. Thank goodness we’d never heard of this song until we hit up whosampled.com, and didn’t even bother listening to it.

Now, WATCH THIS VIDEO IF YOU’VE NEVER SEEN IT BEFORE!!!!