I’ve been working on a remix all day. The last thing I wanna do, right now, is blow my ears out more with some loud, aggressive EDM. So tonight, I’m reviewing what’s been my go to MIXTAPE for chilling time. 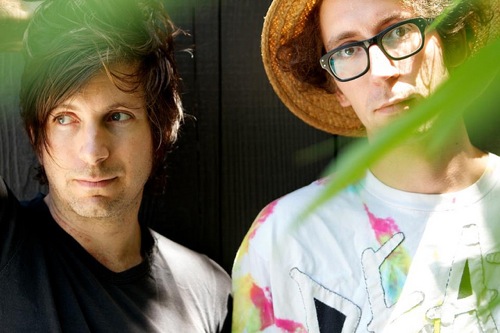 Two good friends, from LA, who took the Indie scene by surprise, last year, with their own unique style that they call “DAYTIME DISCO”. These guys are the opposite of most acts that you’ll find doing the festival circuit, this summer. Their tunes are groovy and totally danceable, but their intended purpose is strictly for relaxing (by a pool, preferably). They’d be more than happy to take the opening afternoon time slot, because that’s the vibe that works best with their sound. Poolside brings a really fresh attitude to the stage, and it’s got a LOT of people taking notice. Especially other musicians.

I’ve had conversations, with a few fellow Heavy Bass producers, about their passion for YACHT ROCK. When you spend most of your time immersed in a world of aggressive music, your personal listening tends to be on the other extreme of the spectrum. You need a break from the hard stuff, so your relaxation time will often be soundtracked by chilled out, deep, and pretty music. Poolside may not quite be Yacht Rock, but they are, perhaps, a modern incarnation of the original 70’s trend, encompassing the same ideals, but existing within the NUDISCO movement, instead. They’d likely be surprised to hear that their fan base contains many producers from the harder side of EDM, who are pumping their ALBUM in between gigs. No doubt, their SEASONS CHANGE Mixtape is getting a lot of play on the road, which is where it was created.

“‘Seasons Change’ is a new mix for the crisp days of Autumn as Winter approaches and the daylight get shorter and shorter. It’s a collection of melancholy tunes we put together while driving through the Northeastern States this past October to fit the moods that come with the changing of seasons.”

HIGH POINTS:  This mix may have been intended for the colder seasons, but with summer fast approaching, I can tell you, from experience, that it works for any time of the year. Since first downloading it, back in autumn, it’s been my favourite mix to play when I need to recharge. It’s an hour of feel good tunes that are all complex and beautiful, without losing their rhythmic appeal. You can bob your head to it, or carry on a conversation, just as easily as you can spend it dancing with yourself (like I know you do when you’re alone). Poolside have discovered this uncharted fine line between chill out and dance music, and on this mix, they ride it soooo well. All these factors culminated amount to Seasons Change having major replay value, which is an impressive achievement in a time where there are just so many mixtapes coming out everywhere all the time, that they have become very disposable. Yet, I’ve found myself going back to this mix again and again, and I bet you will too.

LOW POINTS: Lets ignore what a major faux paw it is that there’s no TRACKLIST for this mix. I’ve written plenty on that subject BEFORE. What I’m more focused on is Poolside’s success in achieving the intended theme of this mix. Do the tunes within really represent the changing of the seasons from fall to winter? I recognize their edit of LAID BACK’s FLY AWAY. That tune is practically drenched in summer vibes. Nothing about it sounds like fall or winter to me. Nor do the couple instances of trickling water sounds you’ll hear at different points in the mix. If the intension was to help us feel warm and summery as the days grow darker and colder, I would say mission accomplished. But instead, the Poolside boys took time to explain that this mix was complied to “fit the moods that come with the changing of seasons”. I really don’t get that feeling at all, while listening. Considering that there was no real need to contrive a theme for the mix, I’m left wondering why they bothered, without ensuring that said theme was met musically. It just seems a bit misleading.

I suppose, if it convinces you to give it a play, when you otherwise would have passed it by, then it’s worthit, because I can’t imagine any musically open minded individual not loving the experience this mixtape brings, regardless of how accurate the theme may or may not be. Artistically, I’d say it’s a bit of a miss, so let’s just look upon it as clever marketing instead, and get back to the pure enjoyment of this wonderful compilation.

Can it be summer now?