Posted in CAN CON, FRIENDS OF DEAD KIDS, HIP-HOP

After it has come to pass, 2013 might be remembered as “Year Of The Girl”. 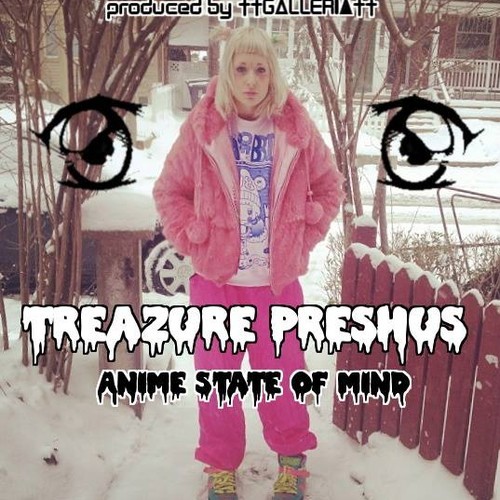 I’d like to introduce TREAZURE PRESHUS to the world. She’s a 20-year-old, Toronto based rapper, with a very fresh take on POP music. Her songs are heavily influenced by a lifetime deeply rooted in contemporary Japanese culture, particularly in a love of Anime & Manga. Some would label her music as TUMBLR RAP, but I feel that this term is a bit dismissive, and “Presh” should be anything but dismissed, for she represents an exciting new movement in music. Female MCs are certainly not a new thing. But, in the past, the women who have risen to fame, in the HIP HOP scene, have done so by rapping like the boys, staying within the typically male content of sex, drugs, money, ego, and violence. Not to discredit the female rappers of the past. They’ve successfully taken on the important role of proving to a very chauvinistic scene that a girl can rap just as well any boy. Now, Presh, and a few other key individuals are taking Hip Hop to a new level, and an unexplored realm, by rapping in a way that is unapologetically and unashamedly girly, in both its content, and delivery. Her “WHITE GIRL RAP” has an honesty to it that has been almost lost in modern Hip Hop. Presh wears her age, gender, and Jewish heritage on her sleeve. If she’s rapping about cars and money, it’s in a strictly ironic way. Her content is much more likely to be about crushing on an older boy, or snuggling with a body pillow. This may sound absurd to Hip Hop purists, but the fact of the matter is that young adult females, who have all grown up with Rap music, are creating and sharing there own version of it, which is, for the first time, relatable to their lives.

Presh dropped her first single this week, and it’s a FREE DOWNLOAD. ANIME STATE OF MIND is an ode to her love of Anime, delivered with plenty of whimsy, to the tune of the LUCKY STAR THEME. It’s produced by another new name on the FUTURE POP scene, ††G▲LLERI∆††, whom I’ll be writing all about shortly. This tune is a lot of fun, but don’t mistake it as a calling card song for Presh. She’s got deeper sounds ready for release in the coming weeks.