MUSEUM MONDAYS: THE INFLUENCE OF PHARRELL WILLIAMS ON TOP 40

What do Britney Spears, The Strokes, Wreckx-N-Effects, Nelly, Azealia Banks, Waka Flocka Flame and Daft Punk have in common? The answer is surprisingly, 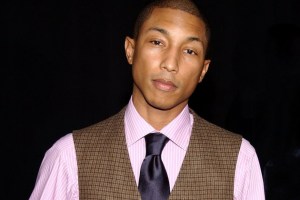 The multi-talented 13-time grammy nominated singer-songwriter, rapper and producer has done an impeccable job at bringing new sounds into the mainstream, without really breaking into the medias focus to accept his 15 minutes of fame. While we know we’re straying from the EDM influence of this blog, Gobs insisted in multiple drunken conversations with ViVi that WAX MUSEUM cover Pharrell’s music. So here you go Gobs, this one is for you.

We were definitely surprised that Pharrell had his hands on this project, doing some production and writing a verse for the track. Around this time he also formed the group “The Neptunes,” which went on to contribute to the sound for many successful hip hop and rap groups of the 90’s and 2000’s. They focused on an off-kilter, stripped-down electronic funk style, and combined sounds from Middle Eastern and Asian music including percussion and woodwind instruments. This style developed during the late 90’s as they produced songs such as Mase “Lookin’ at Me” and N.O.R.E.’s “Superthug,” which gained Pharrell and The Neptunes widespread attention.

As the 2000’s approached, Pharrell and The Neptunes were exploding. Starting with producing Kelis’s debut album in 1999 “Kaleidoscope”, the Neptunes followed up in 2001 by creating the dangerous beat from then Pop-Idols riskay “I’m A Slave 4 U.”

The 2000’s also showcased The Neptunes production of mega-hit “Hot In Herre” by Nelly in 2002, Justin Timberlake’s award winning album “Justified” featuring funk-influenced, multi-snare, mid-tempo singles like “Cry Me A River” (Also 2002) and Pharrell and Jay-Z’s “Frontin” in 2003. Of course, a mainstay of Pharrell’s style is his ability to sing falsetto, which makes singing along to his hooks irresistible, like his uncredited chorus on Mystikal’s “Shake Ya Ass,” and his ability to add his own raps to songs, such as in Snoop Dogg’s 2004 “Drop It Like Its Hot”.

WIth the flat, punchy drum machine sounds and heavily phased string synths that The Neptunes became known for, the duo decided to try something different. In 2001, Pharrell and The Neptunes teamed up as N.E.R.D. to create a new collaboration. After recording their first album, they found it sounded too much like their current music, so always striving to do something original, The Neptunes re-recorded with rock band Spymob to make rock/hiphop/funk infused sound. N.E.R.D went on to release the singles Lapdance, Rockstar, She Likes to Move, and the awesome Everyone Nose (All the girls standing in the line for the bathroom!!)

In 2005 Pharrell released his first solo album “In My Mind” with the first single “Can I Have It Like That” ft. Gwen Stefani.

Between 2006 and 2012 he and The Neptunes worked with a major run of artists from producing to guest vocals and everything in between, adding flare to the songs through genre-blending sampling. These artists included Kanye West, Snoop Dogg, Daddy Yankee, Madonna, Beyonce, The Hives,  The Strokes, Maroon 5, Shakira, The Game, Lupe Fiasco, Mac Miller, Mike Posner, Azealia Banks, Wakka Flakka Flame… the list goes on and on. The Neptunes actually managed to have 24 Billboard Hot 100 top 10 hits during the late 1990s and 2000s, so, by 2009, Billboard had ranked The Neptunes No. 1 on their list of Top 10 producers of the decade and in addition to that, the readers of Vibe Magazine named The Neptunes as the 3rd greatest hip-hop producers of all time behind Dr. Dre and DJ Premier. A survey in August 2003 found the Neptunes produced almost 20 percent of songs played on British radio at the time, a survey in the US had them at 43 percent. Yeah, when was the last time Flo-Rida had a credit like that?

So that being said, why does it always seem that Pharrell and The Neptunes are just a footnote on many of their big releases. Do you never hear them mentioned in conversations about the people who invented and influenced hip hop? How about in the same conversation that’s dealing with Top 40? Why is it always about Dre and Timbaland or Dr. Luke and Guetta? Perhaps if you look at his most popular releases you will find a common denominator, each of the tracks have a unique feel to them. They sound familiar yet they’re fresh in all the right ways. Pharrell has said that after listening to A Tribe Called Quest’s album People’s Instinctive Travels and the Paths of Rhythm he realized that “music was an art”. Williams has truly managed to turn his music into a multifaceted art, one that will appreciate over time.

While we all frantically try to figure out what the big summer song of 2013 is, maybe this year is the year that Pharrell Williams becomes the name on everybody’s lips.

One Response to MUSEUM MONDAYS: THE INFLUENCE OF PHARRELL WILLIAMS ON TOP 40