This months mix is not for passive listening. This is a dancing mix. One so funky that you’ll have a hard time sitting still if you tried, so prepare yourself to get up, and get dowwwwwwnnnnnnn. 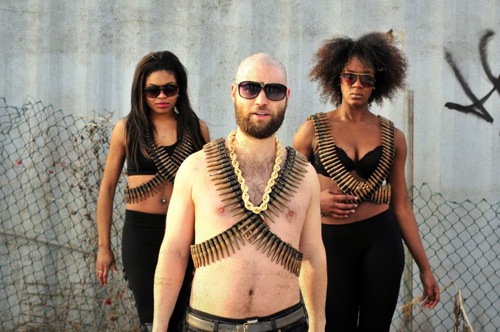 A former juvenile delinquent and bible school dropout, hailing from Brooklyn, New York.  MF REX has since become a larger than life DJ and music producer, and founding member of the AUTOMATIC REACTION POSSE.  Over time, Mr. Rex has developed a cult-like following and has been widely acknowledged as a gifted purveyor of some of the the funkiest, spiciest, most furious spank-o-phonic party jams.

Check out his WEBSITE for a great video that demonstrates high energy turntable skills, affection for anything funky, and obvious 70’s Blacksploitation influence. 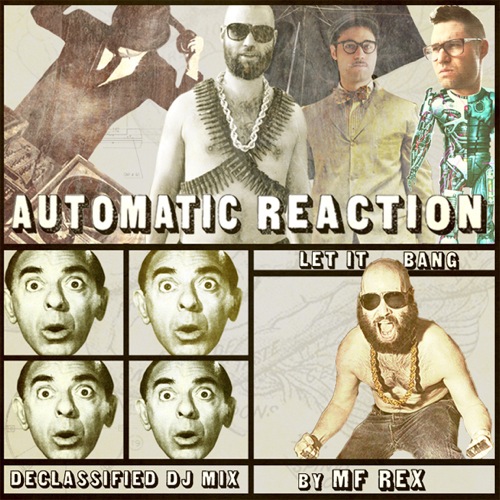 “30 Minutes of non-stop ghetto funk electro bangers, with a healthy dose of cock rock thrown in for good measure”

Well put. If this mix was any longer, I think I’d collapse from raging too hard, before its finish. A bunch of unreleased material, by MF Rex and his crew, is combined with selections from the who’s who of Ghetto Funk. You’re about to hear plenty of familiar anthems, that will have you crooning along, breaking only to shake your tail feather to filthy, upfront Electro loops mixed and mashed with a well rounded selection of dance classics that would appeal to just about any crowd.

HIGH POINTS: It’s been quite a while since I heard a mix that made me say, “Wow, this must have taken a lot of work”. This tape is so busy, it’s impossible to get bored. Your attention is constantly grabbed and held, making it difficult to do anything but just enjoy the musical ride, and dance along. Looking at the track list, I see that this is actually a combination of a bunch of different individual megamixes, most of which were produced by Rex and crew. Whether the work was done in studios, or in the mix, itself, has no bearing on the end result. It’s an incredibly enjoyable listen that keeps you amped up all the way through, starting with the massive party break, off the top, that builds and builds, with anticipation, for a full 1:40 of the duration, before finally exploding into content. Big points are scored, with me, for the BEASTIE BOYS megamix, at 4:03, and the brief breakdown in NOLA BOUNCE is a really nice surprise. There’s a bunch of killer classics, sampled within, that you probably forgot about. I absolutely lost my shit, at 18:33, when GIRL YOU’LL BE A WOMAN SOON drops into the mix, out of nowhere, and is, then, layered with the filthiest of Electro House. I LOVE that tune, but never hear it played anywhere. Obviously, Rex isn’t afraid to stray from the norm, which is exactly what makes this Mixtape such an adventure to listen through.

LOW POINTS: I adore the idea of reprising, in a mixtape. DJs are always trying to move the musical journey forward. It’s rare that somebody pulls off re-introducing a vocal, or loop, back into a megamix, after it has already made a substantial appearance. Rex does this, on several occasions, within Let It Bang. Naturally, it’s a tricky thing to execute properly, and he almost pulls it off… Almost.

At 16:24, we’re greeted with the familar voice of Gran’ma Funk, from GROOVE ARMADA’S I SEE YOU BABY, which compells us to be shakin’ that ass, weaved in and out of the proceeding megamix. It works, great! But only for so long. Eventually, hearing the same vocal looped over and over again, becomes erroneous. At 20:18, when “I see you baby” plays for yet another round, after hearing it extensively for the past 4 minutes, I finally say, “alright, that enough already”. If only Rex had backed off just a little sooner, there would have been no interruptions to the pure enjoyment of this mix.

It’s gots to be funky!