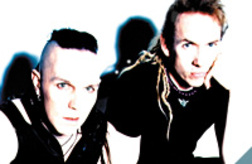 Lab-4 is coming back! – By Tamerax Happy new year everyone! Yes, I know it’s already February but I haven’t written anything this year yet so deal with it!

So, if you know anything about hard trance, then the headline of this article should be making you as excited as I am. If you don’t know who Lab-4 are, then you are about to get a crash course about some of the gods of hard trance.

Lab-4 is a duo formed in 1994 consisting of  Adam Newman and Lez Elston. They are known for making dark, complex, and extremely energetic hard trance with their biggest hits coming out in the 1999 – 2001 years.  They were often called a perfect blend of hard trance, industrial, and hard house with productions that were always a step above everyone else in the field. Having a firm studio and programming background, they put into play techniques learned from hours of studio tinkering with old synths and samplers wired through every type of guitar effect and signal processor available to create an edgy and powerful sound that was unique to Lab-4.

They became so well known for their unique high energy sound, there music has been featured in commercials for Reebok, Bacardi, Polaroid, and Pepsi to name a few. One of there top honours would be the only Hard Dance act to be invited to perform a session live on the John Peel show on Radio 1.  They are one of the few live dance music acts that are actually putting on a real show for the crowd and it’s something to see. I consider myself lucky enough to have seen them play several times on their various Canadian tours. They have put on a better shows than some of the biggest bands I’ve seen.

I can honestly say it was because of Lab-4’s music that I ended up focusing on hard trance as my preferred style as a DJ.

Now you are probably  wondering why I said they are “back”?  Well, in 2006 Lab-4 official broke up and stopped producing together. Adam went on as a solo artist under the name A.D.A.M Lab-4 and Les did his own thing under the name DJ-X. Granted not the best of DJ names but I’m not going to complain because at least they weren’t totally out of the game. They both continued to produced harder styles of music but it was noticeably slower and more “club” oriented.   They never achieved the same notoriety as solo acts as when they were together as Lab-4. Over the years, there was only the very rare live set together for special occasions but no new material was ever released…but then this showed up on YouTube a few days ago

What you are hearing is a mash-up of many new forthcoming songs, as well as some very interesting remixes of past hits.  I haven’t been able to track down any release dates yet but the fact that ANY new material is coming out is amazing! I can’t wait for it to come out and inject some new energy and direction into the hard trance scene.

Need an example of this amazing group? Here is what I have always considered to be the the BEST Lab-4 song, Candyman.

When the new material comes out, you can be sure to hear it in my sets. So keep your eyes and ears out!

Remember that article I posted last year about another amazing hard trance producer, NG Rezonance?
Here is some more free music from him! This time a free remix of a Technikal classic, Music For A Harder Generation.

Shameless self promotion time! I have a new freeform hardcore mix available called Kiking It Hard – Part 2 now available on my Soundcloud page. Over an hour of frantic and high energy hardcore. Also check out my own facebook page to keep with the latest in Tamerax news.

One Response to Lab-4 is coming back! – By Tamerax