THROWBACK THURSDAYS: THE QUEEN OF ROCKABILLY

Would the raspy voice of JANIS JOPLIN ever have been accepted into the mainstream, without the path first being paved by WANDA JACKSON?

WANDA JACKSON – LET’S HAVE A PARTY 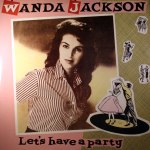 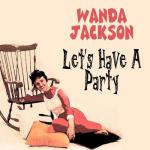 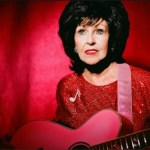 She’s know, today, as the “Queen Of ROCKABILLY”, but it wasn’t until she was well into her 40s that Wanda Jackson started being recognized for her incredible influence of contemporary music. During her early career, her productions were a mix of Rockabilly and more traditional Country, but she was pressured into making Country her focus, as Rockabilly was a very male dominated genre, with the attitude of the time being “girls don’t sell records”. In the mid-60s, as the popularity of Rockabilly faded, the shift in focus to strictly Country proved to be a good move, as far as popularity is concerned.  Jackson achieved a string of hits that continued on well into the 70s, when Wanda became interested in Gospel Music, and shifted her focus once again. The credit she was given for being one of the only female contributors to the early years of Rockabilly remained moderate, but that began to change, drastically, in the 80s, when popular female solo artists started to name Jackson as a major influence, and seek her out for duet performances and collaborations. It turned out that the managers of her early career were wrong about Wanda. Hearing her singing wild ROCK N’ ROLL songs, with all the gusto of the boys, but in her distinctly different voice, had inspired many young girls to first pick up guitars. Wanda has achieved more and more notoriety as the years have passed, making prestigious appearances at festivals and concerts, being inducted into the ROCK N ROLL HALL OF FAME in 2009, and recording a new album, with JACK WHITE, in 2011.

Today, Wanda Jackson perhaps deserves a new title, as The Most Bad-Ass 70+ Woman On The Planet! Check her out, performing at THIRD MAN LIVE, then grab her most notable Rockabilly hit, LET’S HAVE A PARTY, from 1960. Let it inspire you to shake all over, or maybe even change the course of music history. Either/or is good.

DOWNLOAD: Wanda Jackson – Let’s Have A Party (RIGHT CLICK>SAVE AS)

Makes you wonder who’s making music today, that will be praised for it 50 years in the future.

One Response to THROWBACK THURSDAYS: THE QUEEN OF ROCKABILLY