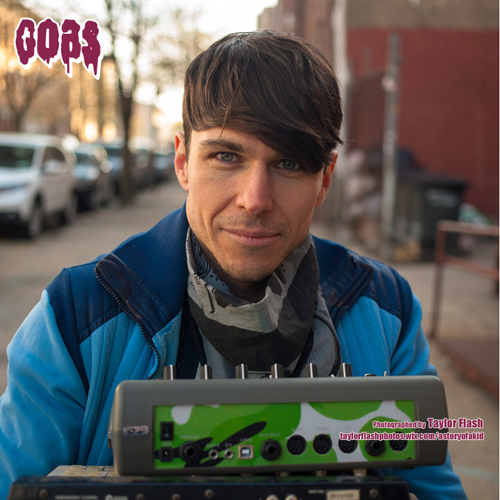 The world’s most charismatic dead man. Gobs is a music producer, performance artist, and one of the worlds best open format DJs. He has developed a strong cult following in North America, which is rapidly expanding across the globe, largely due to the popularity of his monthly podcast, Dead Air, broadcasted on Digitally imported’s Electro and DJMixes streams. Gobs has a huge rapport with his fans. He communicates regularly through his music blog, Dead Kids Get Lively, and his Soundcloud is constantly updated with multi-genre mix sets, remixes, and original productions. Pop music sensibilities, and a past rooted in 90′s Rave culture, combine with a flare for experimentation, and a persistent obsession with the future. Gobs might just end up changing the sound of modern electronic music.

A UNIQUE PERSPECTIVE ON MUSIC

Gobs is against the disposability of modern music and only adds songs to his collection that contain timeless elements which keep a particular tune enjoyable for years to come. While most music blogs post many songs with very little focus on individual artists, Gobs intends to give the makers of outstanding music the attention they deserve, by writing articles that focus on a particular song and what makes its producer unique. Every post contains a free download, but also encourages readers to follow the artist in mention, learn more about them, and purchase their music, when available. Most blogs only focus on new music, but as a self proclaimed music geek and lover of timeless songs, posts by Gobs might focus on a tune made anywhere from the 1950’s right up to the yet-to-be-released future. As his musical tastes are not bound by any specific genre, Gobs has a particular affinity for songs that defy categorization.  The result is a blog that contains an incredibly diverse pallet of music, with quality over quantity always being the focus.
While a follower of all genres of music, Gobs does have his particular niches. Naturally, he is a collector of songs by, for, and about the Living Dead. He is also a supporter of the legalization of Marijuana, and collects “Marijuana Music”. A proud Canadian, you will find a concentration of Canadian Content, or “Can Con”, within his collection. His background is in Rave Music, which continually comes out in his blogging. Gobs also boasts an extensive rare vinyl collection, which he loves to digitize and share with his readers. The result of all these elements put together is a very unique musical experience, which now has a name: DEAD KIDS GET LIVELY.

SO WHY DANCE MUSIC?

Visitors to DKGL will notice very quickly that there is a real focus on Dance Music. There’s good reason for this and it lies with Gobs and his belief in music as a way to unite people. In particular, it’s when we gather to dance that humanity comes closest to real peace. On a dancefloor, when music is the main motivator, all the things that commonly create barriers between people, like race, religion, age, or sexual orientation, all cease to matter. Everyone becomes connected as they all move to the same groove. Some may find this concept cheesy, but Gobs believes in it strongly, and for him it places a great importance on quality dance music and it’s ability to command the attention of listeners and compel them to move.

7 Responses to About GOBS